We develop various machine learning techniques and apply them to several human-in-the-loop systems. 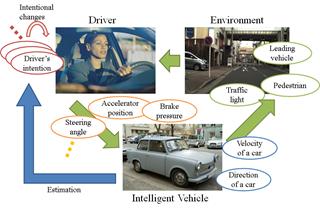 We don’t randomly drive a car, we drive it in some organized way. Humans drive cars while referring to some driving contexts and output some well-organized sequence of driving behaviors to adequately move along a street. We are trying to develop an unsupervised machine learning technique, called the double articulation analyzer, which can extract meaningful segments of driving behavior. In addition, we intend to develop several advanced driving assistance systems in the future for creating an exciting symbiosis between humans and machines.

** This research is mainly a collaborative research with DENSO CO. 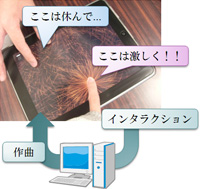 Music composition is one of the human creative activities. However, song writing is still a difficult problem for most people without professional skills and knowledge about music. We developed an automatic song generation algorithm that enables users to interactively write a song on the basis of a machine learning technique, such as the Bayesian nonparametrics.